There is another shack in Baraboo besides Aldo Leopold’s (see the 9/18/10 “Land Ethic” post) that is well-known to environmentalists: the shack from which George Archibald, co-founder of International Crane Foundation, wooed Tex.  On September 25, my daughter and I heard George tell stories about those days as he opened the “George and Tex” exhibit at ICF.  It was a love story, at least on the part of Tex, a female Whooping Crane.

The Crane Foundation has a captive breeding program to help increase the numbers of Whooping Cranes.  The whoopers, along with Sandhill Cranes, are the only cranes native to North America and their numbers at mid-century were pitiful.  The beautiful, white birds were almost extinct.  Tex came to ICF already imprinted on humans, meaning that she failed to identify with cranes and only wanted to be with humans.  Particularly dark-haired, male humans.  Especially George.  She chased away any females who came near them.

In order to put Tex in the mood to “breed” (be artificially inseminated), George built a small hut inside her pen and stayed with her during the breeding season, acting, for all practical purposes, as her mate.  Sometimes he read and got work done inside the tiny wooden house but he was always available to dance with Tex, as all cranes like to do, to establish their bond.  In 1982, Tex laid an egg that hatched into a chick named Gee Whiz that, to this day,continues to contribute to a healthy Whooping Crane gene pool.

You may have heard of ultralight aircraft being used to teach birds migration.  That is where some of the ICF cranes go, to Necedah National Wildlife Refuge a bit north of ICF in Wisconsin, to live in the wetlands and learn a migration route to Florida.  Being as it’s Wisconsin, land of the Cheese Heads, the eleven Whooping Crane chicks raised at ICF this year were all named after cheeses, such as Ricotta, hatched on my birthday, June 10.  (There are also seven whoopers that hatched in the wild at Necedah and two survived, to be joined by those hatched at ICF.) 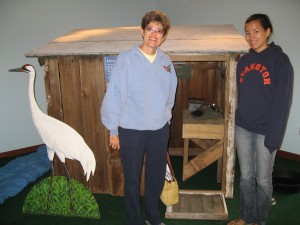 All the chicks at ICF are now raised by aviculturists, interns, and volunteers dressed in white outfits with a crane-head puppet on one hand, speaking not a word.  No more imprinting on humans!  With no more need for George’s shack, it is on display as part of the “George and Tex” exhibit–a testimony of Tex’s devotion to George and, even more so, of the Crane Foundation’s devotion to the protection and continuation of cranes.