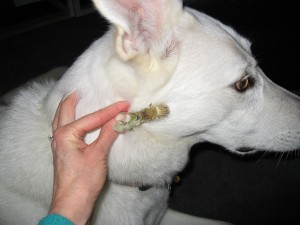 In 1941, a man named George de Mestral went hunting for two weeks in the Swiss mountains.  Switzerland, like many places in the world, has plants with burrs and those burrs stick to anything fuzzy.  By the time George got home, there were so many burrs on his trousers and tangled in the fur of his dog (an Irish Pointer), it took a long time to remove them all.

George got curious.  What made the spiny seedpods grab onto the fur?  De Mestral was an engineer with a scientific mind.  And he had a microscope. (People started developing microscopes in 1590 to examine things too small to see with the naked eye.)  When he looked at a burr under the microscope, he saw that each spine was bent at the end, having what he called in French crochet, which means hook.  The hooks made the burr stick to anything soft that brushed against it—an  ingenious way to scatter the seeds of the burdock plant!

Not only did George admire the plant’s method of seed dispersal, he decided that people could use this same technology, if only he could find a way to manufacture it.  He imagined creating a zipperless zipper and even got a patent for it in 1951.  But it took him many years to invent his version of the burr’s hooks.  He got up at sunrise every morning in his small cabin in Switzerland and tried to figure out how to use nylon, a synthetic fabric, to grab onto velour, a velvety cloth.

De Mestral finally developed a manufacturing process and—voila! Velcro® (a combination of the words velour and crochet) was born.  First, astronauts used it in outer space (very useful in zero gravity), then skiers on their outfits, and pretty soon the new hook-and-loop technology appeared on wallets, clothes, book bags, and shoes.  George de Mestral became a millionaire, moving from his mountain hut to an elegant chateau, all because he learned the secrets of a burr.

One day, when he visited his manufacturing plant in the United States, George gave the bosses there some advice: “If any of your employees ask for a two-week holiday to go hunting, say yes.”  George de Mestral knew that if you go outside and pay attention, you might be surprised by what will stick with you.

This is the first in a series of MS. TREE’S NATURE MYSTERIES, an introduction to biomimicry by Barbara Wolf Terao.