Spring in downeast Maine is slow to arrive. Arctic currents swirl in the Atlantic and frequent rains dampen visitors’ spirits. In spite of the warnings in the guidebooks, my daughter and I took a chance and booked our stay in Bar Harbor for early June. Some restaurants, such as the highly recommended Burnt Tree in Otter Creek, don’t even open their doors till mid-June. But it was the best time for our schedules, so off we went! 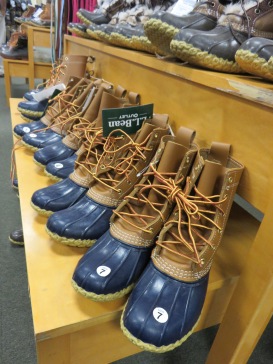 Stephanie among flowers on Bar Island

We got lucky. The weather was kind to us and the people even kinder.

We stayed at Acacia Inn, fed well every morning by Anna and Ralph, and wandered from there to the water’s edge. When it was low tide, we walked from the town of Bar Harbor to Bar Island, both named for the sand bar that appears and then disappears between them every day. Beyond the spruce forest on the island, we came upon a field bursting with spiky lupine flowers, as if Miss Rumphius of children’s book fame had been there spreading seeds.

We purchased our $25 pass for Acadia National Park at Hulls Cove Visitor Center, good for seven days. A group of Corvette drivers had made it their destination for the day and departed as we arrived, engines purring. Perhaps they were acknowledging, as we were, the centennial of the National Park Service, 1916- 2016.

From Hulls Cove, Stephanie and I went straight to the highest point on Mount Desert Island, Cadillac Mountain. We parked our rented Ford Focus and hiked to the bare, rounded peak of pink stone, a type of granite named for the mountain. At 1,530 feet, we could see for miles in all directions and noticed Bar Harbor and Bar Island to the northeast. Clouds shrouded the Porcupine Islands beyond.

At Jordan Pond, two Mi’kmaq men wove ash strips into baskets and a lone beaver wove sticks and branches into a home. Stephanie and I both tried our hand at the former but left the beaver to his own business. 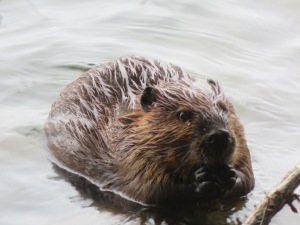 For five days we explored the sights, sounds, and smells of this eastern national park, driving on the Park Loop Road and hiking on the (vehicle-free) carriage roads and trails. The Ocean Path took us from Otter Cliffs to the pounding waves of Thunder Hole and, eventually, to Sand Beach. Though the water was a chilly 48 degrees, we waded in the surf and let the coarse sand buff our feet.  Our longest hike was the Triad Trail, taking the better part of a day and rewarding us with the woodsy scent, peace and quiet that come from wilderness, far from the popular paths. 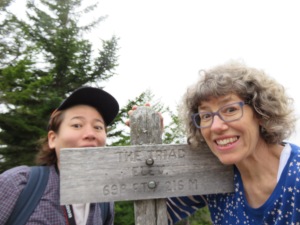 Returning to Bangor for our flight home, we went to a Ringo Starr and His All-Starr Band concert at the Cross Center. Ringo wore a red and black plaid shirt like the Paul Bunyan standing outside the building. Even my favorite Beatle was part of the Maine mystique as he drummed us out of our reveries of nature, back to our cities of Chicago and New York.

Ringo sighting in the Cross Center in Bangor

Paul Bunyan sighting at the Cross Center in Bangor