When push comes to shove, and it’s predicted that it will within the next fifty years, the earth’s wrestling match at the Cascadia subduction zone is bound to wreak havoc along the Pacific coast of the United States. Kathryn Shulz wrote an article in the New Yorker called “The Really Big One” that lays out a scenario of earthquakes and tsunamis as one planetary plate gives way to another. That sobering prediction sent me in search of some better news about the dirt under my feet.

Probably the coolest things the layers of the earth can cough up are fossils. Last week I saw a bunch of magnificent fossilized bones (and casts of bones) at the Burpee Museum in Rockford, IL. Some of the critters swam around here during the Cretaceous Period when shallow seas covered this land. Their shells and bones helped form our limestone and other sedimentary rocks. I especially enjoyed the fossils of little turtles and one huge guy, as you can see below. 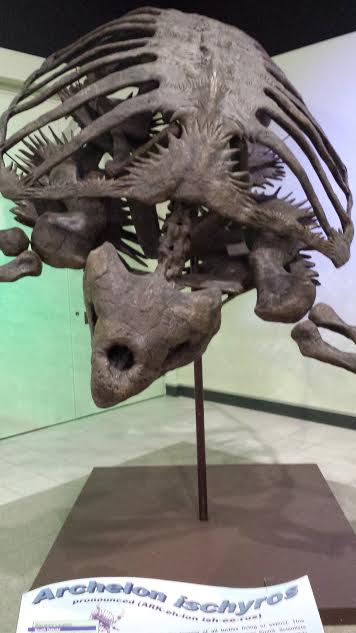 This sea turtle fossil is the size of a Smart Car.

A couple days after visiting the museum, I went to Cave of the Mounds in Blue Mounds, WI, and saw some more fossils, including a six-foot long shell in the ceiling of the cave.  That’s another cool thing about deep earth: caves.

Caves are literally cool. It was 90 degrees outside on July 30, yet the cave was 50 degrees, as it is all year round. That’s how our geothermal heating and cooling at our cabin works. We have pipes going 150 feet straight down, till they hit rock, and we make use of that temperature difference to control the comfort of our home.

Cave of the Mounds, Wisconsin

This particular cave was discovered August 4, 1939, while blasting the hillside for limestone. Because the cavern was enclosed before that discovery, there are no bats, blind fish, or albino spiders in there, like in some other caves. The only life forms are the tiny spring tail insects that seep in with the rain. I saw specks of their nymphs in a pool of clear water.

With all the stalactites and stalagmites growing toward each other in that cave, you can see how the earth is always changing, both on the surface where we walk around and deep inside where we rarely notice Mother Earth’s activities until they erupt to the surface. No wonder many people consider Gaia, our planet Earth, to be alive.

As that big turtle, archelon ischyros, found out, changes happen. Let’s prepare for the bad ones and appreciate the others. May you stay safe through it all.

Stalactite with calcite crystals, Cave of the Mounds