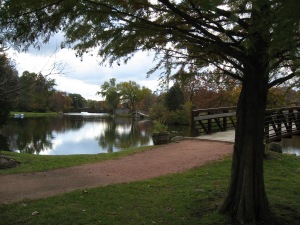 A good place to walk

It seems that the more we improve our roads the less hospitable they are to people.

I remember hearing an engineer at a town hall meeting reveal his proposal for an “improved” road by our summer home.  Our neighbor, Mrs. Miller, stood up and said, “Over my dead body!  I will lay down in front of your bulldozers before I let you turn our road into a four-lane highway.”  As a child hearing her words, I pictured her soft body on the earth, gray hair nestled in fallen pine needles, as heavy machinery roared toward her.  I believed her—that she would lay down her life to save the forest—and I have come to understand her passion.  She loved that land like life itself.

Mrs. Miller fell in love with the north woods of Minnesota by tending it for all of her years.  For me, I fell in love with trees.  I am happiest when I am climbing a tree, or at least sitting by one.  Every trail I walked and every fort I made out of meadow grass brought me closer to the land.  I was wooed by the peace and beauty I found there.  It got harder to go play outside as I got older, but now I am trying to make it a priority.  Just as our mothers told us, I am telling myself: go out and play.  And here’s another childhood mantra: stop, look, and listen.  I try not to rush through my nature walks, but, rather, take time to open my senses.

To know the land is, usually, to love it.  I believe that loving nature is the beginning of conserving it.  Caring about it makes me want to care for it.  It seems to me that ecology is an inside job. “Environment” may be defined as something outside myself, but the seed of environmentalism is found within me.  How do I care for myself and how do I care for the planet?  Mother Earth offers me her talents and, in turn, I use what small gifts I have to protect, enhance, and appreciate her.

Mrs. Miller brought her passion.  My father brought research about road regulations that he’d gathered at a university library to prove that the requirement for the width of the road was not as the engineer had claimed.  My family and our neighbors loved that land and we showed it.  The road was repaved but remained two lanes, and trees and meadows were saved.  And it is still a good road to walk or bicycle along.

By the road in Minnesota

Two things about John Francis are stunning to consider: He chose to not speak for 17 years and chose to walk everywhere for 22 years.  His parents worried for his sanity, but eventually saw that he was living by his values.  His wandering reminds me of Johnny Appleseed planting all those trees, and his silence reminds me of Anne LeClaire who chooses to be silent two days a month.

A TED talk brought him to my attention and I found his book Planetwalker (2008, Washington, D.C.: National Geographic) in Evanston Public Library.  When John Francis was a young man in 1971, he witnessed an oil spill from two tankers that collided under the Golden Gate Bridge.He decided that he didn’t want to depend on things that depended on oil, so he gave up riding in motorized vehicles.  He walked everywhere, often playing his banjo as he went.  To complete his college education, he walked from California to Southern Oregon State College, then onto Missoula, Montana for a graduate degree, then to Madison, Wisconsin for his Ph.D. in land resources.  Eventually, he crossed the entire country on foot.

His parents stopped wondering about his mental health and started following his accomplishments with pride.  John could only converse with them by notes and hand signs because he gave up talking.  He got all those degrees without saying a word!  He gave up talking for a day so he could listen better.  The day turned into a year and the year lasted until April 22, 1990.  “I have chosen Earth Day to begin speaking,” he said, “so that I will remember that now I will be speaking for the environment.” (p. 250)

Dr. Francis said (p. 274), “I think I’d like to refer to myself as an environmental practitioner instead of an environmentalist.  … [P]ractitioner implies becoming and doing something in order to improve.  In the end, I think it’s about learning to live better on Earth.”  In 1991, he was hired by the U.S. government to help draft oil spill regulations.  He also founded an environmental organization, Planetwalker, and developed a curriculum he calls Planetlines.

One of the things he wants to share is that “walking and silence save me.  They not only give me the opportunity to slow down to listen and to watch others; they afford the same opportunity with myself.” (p. 50)  John’s pilgrimage was an individual journey, but its effects rippled far and wide.  I learn from him to walk the planet in new ways.