I’ve written about my favorite birches, oaks, and redwoods, and even a post titled, “Have You Thanked a Tree Today?” Currently, I have another tree to thank and my gratitude reaches a new level, coming from the very marrow of my bones, even as that marrow struggles to make white blood cells. The leaves of Taxus Baccata, the European yew, are the basis of a drug called Taxotere (generic name: docetaxel) that is helping to save my life. 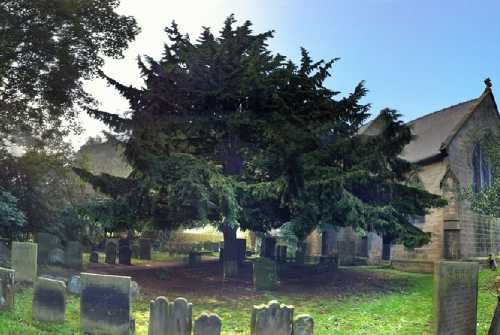 My Welsh ancestors may well have had such yew trees growing nearby, as they were favored in church yards. The toxic leaves repelled the cows, thus protecting the cemeteries from trampling. Nothing could protect the trees, however, from monarchs’ demands for springy yew wood to make longbows, depleting forests for 300 years until guns became the weapon of choice in the 1700s.  But a few ancient yews, some more than a thousand years old, can still be found in the old church yards.

Now the trees contribute to my longevity as I take my chemotherapy treatments for breast cancer. Of the four drugs injected into my system every 21 days, Taxotere from European yews (or Taxol from Pacific yews) is most common. It is apparently a reliable and accurate assassin of cancer cells and has helped shrink my tumor to a fraction of its former size. Due to its’ effectiveness in treating various cancers, there is a rise in demand from pharmaceutical companies that could again threaten yew populations. After all, cancer drugs are lucrative business. For instance, the United States saw $3.1 billion dollars in sales of Taxotere in 2010.

I wish the trees, and all those receiving their medicine, well. Yeah, they inhibit all the cells in my body, even the good guys like white blood cells, from dividing and make me nauseous and almost bald. I’m as sick as a cow in a graveyard, but I plan to get rid of disease, recover from the side effects and surgeries, and live cancer-free.

As I said to my nurse during chemotherapy, “You’re giving me poison in order to save my life.” She said that’s right. Thank you, yews. May we turn your cytotoxic poison into medicine so we can stand strong and live. And may you do the same.